GFI: You’re probably aware that Megaupload has wandered into what can only be described as a bit of a pickle, assuming said pickle is roughly the size of a Vogon Constructor Fleet.</p>

Given that lots of people probably want to take a peek at the FBI Anti-Warning currently pasted across the front of Megaupload.com (or maybe even just see if the site is back online), it’s a fair bet that Ye Olde Typo Fairy will be called into action and some of them will end up going to Megaupload(dot)cm.

You can see what they did there.

On the basis that Wikipedia hasn’t gone dark for a day or covered itself in pictures of Jimmy Wales, we can see that the .cm TLD is intended for domains connected with Cameroon. Typosquatting seems to be a bit of a thing:

In a report published in December 2009 by McAfee, “Mapping the Mal Web – The world’s riskiest domain”, .cm was reportedly the riskiest domain in the world, with 36.7% of the sites posing a security risk to PCs. [5] It is widely assumed that malicious domain programmers rely on inadvertent misspellings of well-trafficked websites ending in “.com” to lure unsuspecting users to their domains.

Registered back in 2009, Megaupload(dot)cm takes you a site located at surveytakelive(dot)com, which tells us via the method of popup box that there are prizes up for grabs and you’ll have to fill in some personal information. 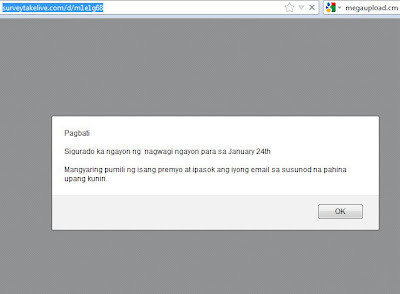 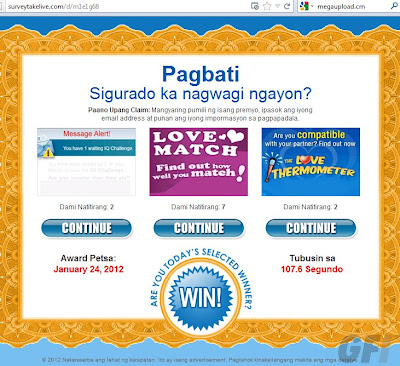 Hitting the Love Thermometer button takes us to a promo located at enterfactory(dot)com, which turns out to be a mobile phone promotion costing various amounts of cash per day until the user unsubscribes. 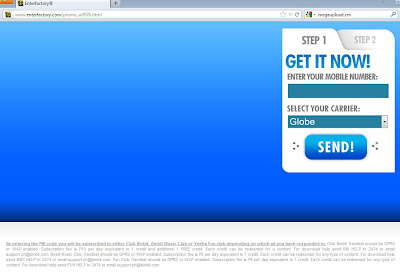 The adverts served are region specific – the above are what you’ll see if in the Philippines, whereas visiting from the US will result in iPad, Walmart and Visa giftcard offers instead.

Be mindful of what you’re typing into the URL bar, and let me know if you discover what the Love Thermometer actually does…