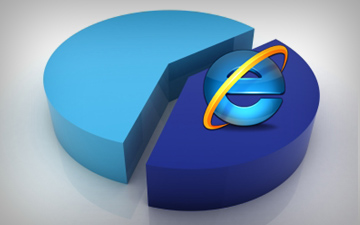 Mashable: Internet Explorer can no longer claim more than half of the web’s traffic, as of October, ending more than a decade of the default Microsoft browser’s reign.

Safari’s hold on 62.17% of mobile traffic has reduced IE’s overall share of web browsing, despite still claiming 52.63% of desktop traffic, according to Netmarketshare.com.

The Microsoft browser’s diminishing share (49.6%) reflects its near absence from the realms of mobile and tablet, which now make up 6% of web traffic. However, chances are, you gave up on IE long enough ago that this milestone makes you more curious as to who actually still uses the browser.

As of October, Firefox is the second most popular web browser, accounting for 21.20% of traffic, followed by Google Chrome and Safari, which account for 16.60% and 8.72% respectively.

Chrome, which recently celebrated its third birthday, experienced the most expansion in October, increasing its share of the desktop market 1.42%.

Safari, the default browser in Apple’s iPhone and iPad, continues to increase its dominance over the mobile web, gaining 6.58% of the market. Safari’s share is increasing faster than the iPhone’s, probably due to how much mobile traffic is now driven by iPads.