SophosLabs: Scammers have put a new spin on an old Facebook scam, claiming that a girl killed herself on Halloween after her father posted a message on her wall.</p>

Girl-Killed-Herself-on-Halloween-After-Dad-Posted-This-on-Her-Wall
[LINK]
This is unbelievable.. shocking..

The messages are currently spreading very quickly on Facebook, as – at the moment at least – Facebook's built-in security systems are not blocking them.

We've seen similar scams in the past, of course, including some which claimed that the girl killed herself on Christmas Eve rather than at Halloween.

Of course, the story is purely designed to lure you into clicking on the link. So what do you see if you do click on the link? 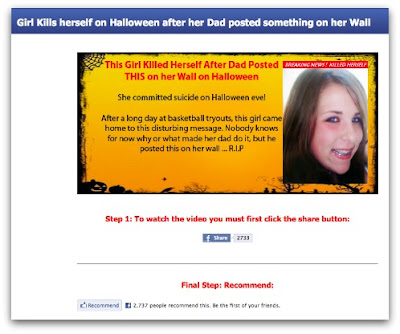 You are taken to a third-party webpage where you are told that in order to view the shocking message left by the father on his late daughter's Facebook wall, you will have to “Share” and “Recommend” the link with your friends.

Woah!! Would you really share and recommend a link before you've actually found out what the content is?

Sadly, lots of Facebook users are so curious that they will do exactly that – helping the message spread for scammers.

And why do the scammers want the message to spread?

Because it drives traffic to online surveys like this, which earn the scammers affiliate commission: 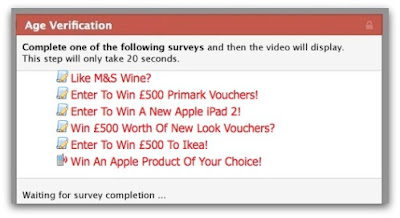 If you were fooled into participating in this scam remove the message from your newsfeed, and delete any messages you may have inadvertently shared with your friends. That way at least you are no longer spreading it with your online chums.

Make sure that you keep informed about the latest scams spreading fast across Facebook and other internet attacks. Join the Omid's Blog page on Facebook, where people regularly share information on threats and discuss the latest security news.</div>