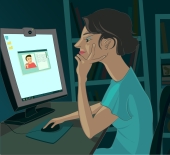 You buy a second-hand laptop using it to, among other things, have secret sexy video chats with your significant other. Unbeknownst to you, naked photos of you are being taken by a company hired to track down the stolen laptop.

This is what has happened to Ohio-based Susan Clements-Jeffrey and her boyfriend.

Absolute Software is in the business of helping people recover their computers. Fair enough. But is taking nude snaps of the person using the stolen laptop a step too far?

What does the judge have to do with this? Well, Susan is suing Absolute Software.

She is a substitute teacher who reportedly bought the computer from one of her students in 2008 for $60. The student told her it was a gift from his relatives, that he had got a new one, and this one was now for sale.

Turns out the laptop was stolen from Clark County School District in Ohio. They had purchased and installed Absolute Software's theft recovery service – called LoJack – onto their computers, so when the stolen laptop was connected to the internet, LoJack collected the teacher's IP address.

Rather than handing the information over the police to track her down, Absolute Software employee Kyle Magnus reportedly decided to intercept communications, including Susan Clements-Jeffery's saucy video chats.</p>

Magnus then forwarded the collected information, including revealing pictures and sexy conversations to a police detective. According to Wired, the cops arrested Susan for receiving stolen property, but charges were soon dismissed.

Susan now is suing the lot of them: Absolute Software, their employee Kyle Magnus, the city of Springfield in Ohio, and the two cops who arrested her (did I mention the cops apparently waved the nude snaps when they first knocked on her door?)

So my take on this? I have no problems with Absolute Software and the cops trying to get the stolen laptop back. Fine. But using saucy pics to embarrass who ended up using the stolen property just screams ‘a step too far' to me.

You can read a much more detailed report, written by Kim Zetter, on Wired.</div> </div>