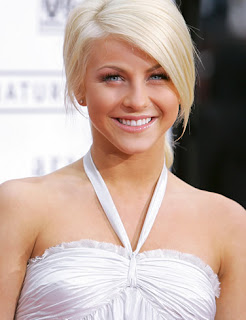 SophosLabs: Julianne Hough is famous in the United States not just for being an actress and country music singer, and dating “American Idol” host Ryan Seacrest, but also for having won ABC's “Dancing with the stars” TV show twice.

So, hardly the kind of woman who you would think would need to resort to a cheap publicity stunt to raise her profile.

But no doubt there are skeptics who are right now wondering if the news that her mobile phone was “hacked” and one hundred of her private photographs published on the net is nothing more than a way of gaining attention.

There's nothing particularly salacious to be found in the photos that have been published – Julianne has a reputation for being a “good girl” – but clearly the photos of her posing in her bikini and sunbathing were intended for her eyes only (or at least hers and perhaps Ryan Seacrest's). Those hoping for titillating images of the dancer topless or doing a watusi with Ryan Seacrest will be mightily disappointed.

A quick check of Miss Hough's Twitter feed reveals that she normally posts messages from her Apple iPhone.

It's unclear how photos would have been stolen from the iPhone, unless someone else had physical access to the device, to a computer the iPhone had been synched with, or if the photos had been uploaded to the net in some way (in the case of the latter it's not really a phone hack is it?)

Nevertheless, there's some very simple advice I can give to any budding starlet who might be worried about private photos of themselves leaking into the public.

If you don't want your boss, your wife, your schoolfriends, or even the entire internet to see a photo – think twice about taking it in the first place, and if you do take the photo keep it in a very safe place away from the internet.

Furthermore, keep your smartphone secured with a strong passcode. Too many people use easy-to-guess passcodes, or no passcode at all, which isn't going to provide much protection if you leave your iPhone in a bar.

Stars who have claimed to have had private photos of themselves stolen by hackers in the past include Vanessa Hudgens, Miley Cyrus and Lady Gaga.</div>