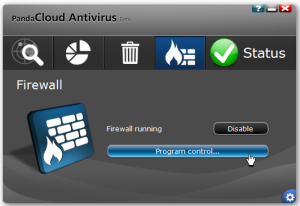 The new firewall is community based, which means it’s capable of detecting known processes and settings appropriate levels of protection for them without bothering the end user with a pop-up alert. The new firewall is visible from a new tab on the Panda Cloud Antivirus interface.

Panda Cloud Antivirus, which uses cloud-based community feedback to augment its virus signatures to provide protection against unknown and malicious files, is renowned for its lightweight footprint, making it especially suitable for low-powered machines such as netbooks and PCs running 1GB or less of RAM.

The new firewall provides a set of application and system rules to provide two-way protection against both threats originating from the Internet and those already present on the computer. The firewall is capable of automatically granting outbound access to connections deemed secure or a low risk, but will prompt the user for riskier connections. Inbound connections are treated in the same way, except the approach is much tighter to prevent unknown risks slipping through the net. The user can review, and edit, what settings have been applied by clicking the Program control button on the main interface.

Version 1.9.1 Beta also includes a number of improvements and bug fixes to the antivirus portion of the program, including an “improved cache” where previously scanned items are held to speed up future scans by skipping known trusted files. The Behavioural Analysis engine has also been optimised for both on-demand scanning and real-time protection as triggered when files are accessed.