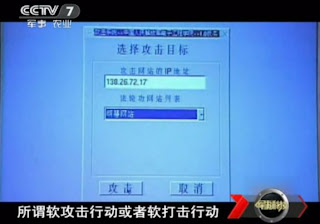 Schneier on Security: It's hard to know how serious this really is:

The screenshots appear as B-roll footage in the documentary for six seconds­between 11:04 and 11:10 minutes — showing custom built Chinese software apparently launching a cyber-attack against the main website of the Falun Gong spiritual practice, by using a compromised IP address belonging to a United States university. As of Aug. 22 at 1:30pm EDT, in addition to Youtube, the whole documentary is available on the CCTV website.

The screenshots show the name of the software and the Chinese university that built it, the Electrical Engineering University of China's People's Liberation Army­direct evidence that the PLA is involved in coding cyber-attack software directed against a Chinese dissident group.

The IP address 138.26.72.17 belongs to the University of Alabama in Birmingham (UAB), according to an online trace.

The shots then show a big “Attack” button on the bottom left being pushed, before the camera cuts away.