BetaNews: There is a lot of buzz about a recent set of tests by NSS Labs that show the Smartscreen reputation system in Internet Explorer 9 head and shoulders and most of the rest of the body above the competition in blocking malware on the web.</p>

I think the results of the test are even more important than they seem, considering previous reports that Microsoft plans to make Smartscreen a base part of Windows 8. This would extend parts of the protection to any executable hitting the file system. This would be big news.

For the 8 percent of sites that Smartscreen doesn't block, there's backup protection. Smartscreen tracks downloaded files (presumably by some hash like SHA-1) and a reputation for them. If the file is known to be good, it goes through. If it's known to be bad, it's blocked. If the system doesn't recognize it, the file throws up a warning:

This warning could be a bit clearer at the cost of brevity, but I think it's worth it: “Microsoft has not yet encountered this file. If you know this file is new and unusual and know that it is safe, you may proceed. If it doesn't make sense that Microsoft has not yet seen this file, you may wish not to execute it in the interests of your own safety.” I hope Microsoft submits such files to VirusTotal or some such service in order to share them with the rest of the AV community. 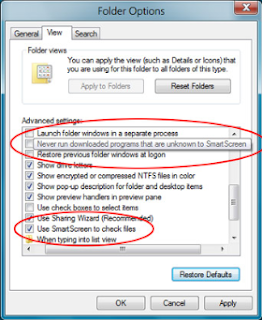 So back to Windows 8: At least some betas have included indications that this version of Windows will apply Smartscreen to any file, or at least any executable, that hits the file system. This would address one misplaced criticism in Smartscreen in IE9, that it only protects against the web vector. Of course, the web is how the vast majority of malware is distributed these days, but fix that route and attackers will move elsewhere, so Microsoft has to think ahead.

I've argued that Microsoft should open up Smartscreen to other apps the way Google opened up the Safe Browsing API; Firefox was using it long before there was a Google Chrome. But putting the system into Windows itself may make that less advantageous.

We're always hearing about the coming obsolescence of antivirus software. Could this be it? A Win8 Smartscreen as I see it doesn't cover everything an anti-malware product should. For instance, if you're offline and copy a file in via a USB drive would you be at all protected? I don't know. It's getting there though.