My Personal Opinion: I doubt if that site is really their official website or not</p> 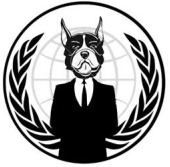 Sophos Labs: Within days of the hacktivist group Anonymous announcing it was setting up its own social network (after being unceremoniously booted off Google+), its plans have taken a somewhat humiliating turn.

A group of hackers apparently based in Turkey replaced AnonPlus's main webpage with an image of a dog wearing a suit, mocking the more normal Anonymous logo, and messages in Turkish and English: 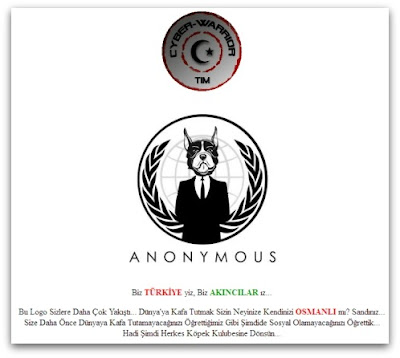 We Are TURKIYE We Are AKINCILAR
This logo suits you more..How dare you rise against to the World..Do you really think that you are Ottoman Empire?
We thought you before that you cannot challenge with the world and we teach you cannot be social
Now all of you go to your doghouse..

You would expect active members of the Anonymous collective to know a thing or two about elementary computer security, but clearly their site had vulnerabilities or someone was sloppy in their choice of password if rivals were able to break in and change the content.

I think the message we can take from this defacement is that not every computer enthusiast in Turkey is a fan of Anonymous.

In June, in an attack dubbed “Operation Turkey”, Anonymous supporters brought down Turkish government websites in protest against controversial plans by the country's authorities to introduce internet filtering.

Turkish police responded a week later by detaining 32 people in connection with the internet attacks in locations up and down the country.

It's very easy to imagine that those involved in hacking and cybercrime all have the same objectives, and form a united front. However, the truth is that there's back-stabbing, disagreements, fall-outs and (as we appear to see in this case) sometimes these can result in hackers taking pot-shots at eachother.

One thing's clear. This is not a great advertisement for AnonPlus's future security, and anyone thinking of joining Anonymous social networking initatives in future might be wise to think twice.