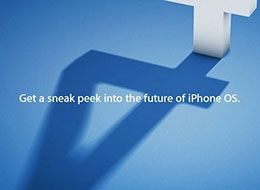 One of the finer points Steve Jobs let loose at the end of the iPhone OS 4.0 announcement today is that only the iPhone 3GS and iPod touch third generation (the most recent iteration from fall 2009) will have the capacity to support the iPhone OS 4.0’s new multitasking features.

In other words, owners of the iPhone 3G, iPhone 2G, and first or second generation iPod touch models will not be able to multitask.

The current generation of devices “will run pretty much everything” in the new mobile operating system. The earlier iterations of iPhone and iPod touch, however, “will run many things, but not everything.” Jobs says they won’t be able to support multitasking because “the hardware just can’t do it.”

That’s bad news for owners of those products, who won’t be able to take advantage of one of the major updates coming in the new OS. This is certainly not unprecedented in the fast-paced world of technology development, but we’re sure there are a number of users of earlier iPhone and iPod touch models who are a wee bit miffed at this point.

What do you think: Is this par for the course? Should Apple have done more to support older product lines? Or should owners of initial generation Apple products get used to sucking it up and either upgrading or doing without? Let us know your thoughts in the comments.