Apparently, Facebook isn’t the only online sphere where ninjas are becoming a problem — The LinkedIn Blog reports that the job title “Ninja” has become more and more popular since 2002.

According to LinkedIn, those who deem themselves “ninjas” tend to work with computers, social media, design, customer service, advertising and finance, and — as you can see from the chart below — their ranks have been steadily growing since the dawn of the century. 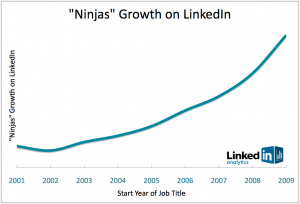 Obviously, they are fortifying their numbers so as to take on some great adversary, such as Ninja Cat or the upcoming 2010 remake of The Karate Kid.

We can, however, take solace in the fact that the most grating of all self-imposed titles –”guru” — seems to be on the decline. Still, one does wonder what the next hot moniker will be — here’s hoping for “duchess.” 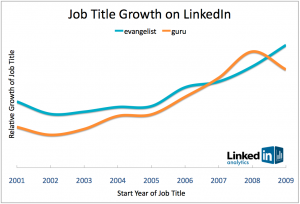