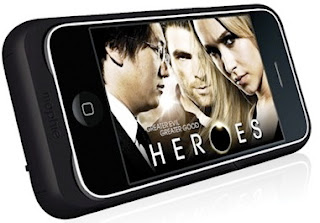 But then Qualcomm began advertising FLO TV on its own, with its own smartphone-sized pocket TVs made by HTC, and it looks like it is finally beginning to stick.

At CES 2010, Qualcomm announced it had partnered with Mophie on an external battery pack that contains a FLO TV chip so iPhone users could tune into FLO TV without the need for a cumbersome dock, external antenna or anything other than what they have shown an interest in already.

The juicepack TV receiver slips onto the iPhone like any other mophie battery pack, and works in conjunction with a FLO TV app to let users tune into their FLO TV subscriptions. It has not yet been released, but is expected to hit the market soon (first half of 2010.)

I got a hands-on experience with the juicepack TV at CTIA 2010, and while the experience is great, there is one aspect to the system that is absolutely brilliant. The 30-pin connector inside of the JPTV unit does not have to be connected to the iPhone for signals to come through.

All of FLO TV’s signals are streamed to the iPhone via a Wi-Fi connection, and the 30-pin connector is used to supply the additional battery power.

Since a physical connection between the JPTV and the handheld device is not necessary, this means users could conceivably connect an iPod Touch or an iPad to the juicepack if they have an active FLO TV account and the iPhone OS-based app. A source close to both companies confirmed that iPod and iPad compatibility does exist, but did not say whether the functionality will be restricted when juicepack TV is released later this year.