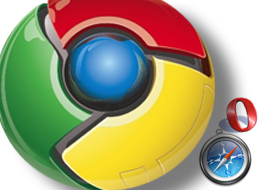 Chrome’s share of the browser market is growing at a breakneck pace, according to data from Net Applications. Between February and March, Google’s browser rose to capture a full 6.1% share of the market, maintaining its lead over browsers such as Safari and Opera and closing the gap between Firefox, which currently holds a 24.5% share.

While most browsers rose a fraction of a percent, Microsoft’s Internet Explorer continued to decline, losing almost a whole percent over the past month alone.

Part of Chrome’s increase may be due to Mac users. In December, Chrome for Mac was released, but many users were loathe to switch browsers because the early beta didn’t have extensions or support bookmark syncing. All of that changed with a new version released in February. At that point, Mac users were given all of the bells and whistles that PC users had, and so many opted to make the move to Chrome.

In a quick poll we conducted on Twitter, many users said they heard Chrome was quicker and migrated from Firefox, Safari and Internet Explorer. But others said they still stick with Firefox due to a few key features — such as Firebug and certain extensions — that Chrome doesn’t have yet. Others complained that Chrome was unstable or couldn’t handle certain websites or user behaviors as well as Firefox. And some of those in the enterprise are still bound to IE, at least during business hours.

Which browser do you currently use and why? Have you recently made a switch?