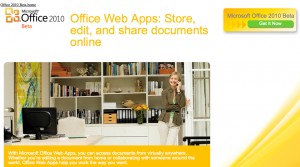 There’s at least one company that isn’t scrambling to get an iPad app ready for launch day, and that company is Microsoft.

Stephen Elop, president of Microsoft’s business division, said in an interview with Bloomberg that the company will “wait and see” how iPad sales perform before adapting Microsoft Office 2010 for the device. “We never say never, but we have no current plans [to develop a version of Office for the iPad],” Elop claimed.

Microsoft Office is a suite of business-related software programs that includes, most popularly, Word, PowerPoint and Excel. The business version goes on sale on May 12, while a consumer edition is anticipated for late June.

For the first time, Microsoft will also release web-based versions of Word, Excel, PowerPoint and OneNote. For a monthly fee, users can access Microsoft’s software on the Internet instead of storing the software on their own computers. Pared-down versions of Word and Excel will also be available free of charge as Microsoft tries to play catch-up with free web applications like Google Docs, which performs many of the same functions as Microsoft’s office suite.

Microsoft’s decision not to adapt their software for the iPad comes on the heels of Google’s announcement to support the device. Google has optimized Gmail for the iPad and readied the Google Mobile App with voice support for launch day. The iPad will also come with the YouTube and Maps apps pre-installed and has Google set as the default search engine on the device’s web browser, Safari.

Is this the right move for Microsoft? Let us know in the comments.