Lots of little newsworthy updates recently . . . they’ve been well-covered elsewhere, but we wanted to make sure our readers saw them as well.

One of the constant complaints that we hear is “the criminal is probably in Russia”, as an excuse for why a case is not worth investigating. Back on November 11, 2009, we posted a story The $9 Million World-wide Bank Robbery, where VIKTOR PLESHCHUK, 28, of St. Petersburg, Russia; SERGEI TŠURIKOV, 25, of Tallinn, Estonia; and OLEG COVELIN, 28, of Chişinău, Moldova were charged with leading the robbery, which actually occurred in 2008. This week the Financial Times has revealed that Viktor Pleshchuk was arrested by the FSB. Their story leads with:

Russia has quietly arrested several suspects in one of the world’s biggest cyberbank thefts, raising hopes of a previously unseen level of official co-operation in a country that has been a haven for criminals.

Other sources, for instance Bank Info Security News have confirmed that Sergei and Oleg were also arrested by the FSB at the same time.

Pasquale Manfredi isn’t exactly a nice guy. The authorities have wanted to arrest him for some time because of his naughty habits such as assassinating his enemies by shooting a bazooka at their car. The Daily Mail says that he also maintained a Facebook account under the name “Georgie”, with Al Pacino’s “ScarFace” as his Profile picture. According to The Register, authorities used intelligence gathered from his Facebook page to identify his location and successfully make the arrest. 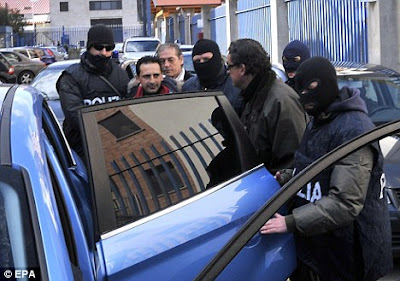 The Associated Press’s Richard Lardner followed up with a story about the way MySpace and Facebook are both being used as investigative goldmines. See his story Break the law and your new ‘friend’ may be the FBI.

“Hacker Croll” an unemployed 25-year-old hacker who lived with his parents had his moment of fame after breaking into the Twitter accounts of President Obama and Britney Spears. The AP story says he was arrested by French police, who have released him to reappear on June 24th for his trial. The hacker calls himself “more of a pirate than a hacker”, and has explained his method to the police. French prosecutor, Jean-Yves Coquillat, says the young man was acting on a bet, and that he is “the sort who likes to claim responsibility for what he’s done.” According to an AFP Story TechCrunch had received more than 300 documents belonging to Twitter employees that were provided by Hacker Croll. Twitter has acknowledged that they seem legitimate.