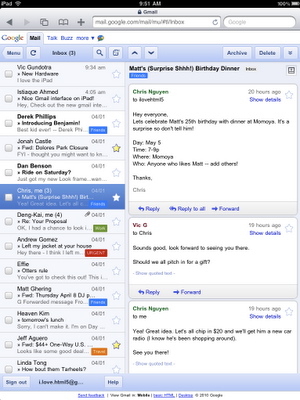 Google today announced its strategy for delivering services on the iPad, and unveiled a new mobile Gmail interface optimized for bigger touchscreens. Since the iPad lies somewhere between a notebook and a smartphone, the Mountain View search company is taking a hybrid approach, offering some services in their desktop format, some in their mobile format, and some as standalone apps.

“We’re particularly excited by how tablet computers create the opportunity for new kinds of user interaction,” Punit Soni, Product Manager for Google Mobile wrote in the official Google blog. “Here on the mobile team, we often talk about how mobile devices are sensor-rich: they can sense touch through their screens, see with a camera, hear through a microphone, and they know where they are with GPS. The same holds true for tablet computers, and we’re just starting to work through how our products can become even better on devices like the iPad.”

The HTML5-encoded Gmail for mobile looks like it has simply been stretched to the right on the iPad, and it now includes a preview window that displays your highlighted email conversation threads. Of course, you can check your Gmail through the iPad mail client, but that does not support threading or “starring” of messages.

Among the 1,348 apps that are iPad-optimized, Google’s YouTube and Maps apps are two of the few that come pre-installed on the new device, and Google remains the default search provider in Safari for iPad. For the rest, today and tomorrow are going to be a game of getting noticed and downloaded on the new platform.