Not so long ago, examples of fake Firefox websites / downloads were in the news with the sites involved serving Hotbar installs.

It seems the tactic of offering up Firefox (but giving you something else entirely) is going to be around for a little while. Below is a site promoting a Firefox .xpi called “The Dislike Button”, designed to let you add an “I dislike this” note to Facebook posts:

The domain is dislikes(dot)info. Note the “Get Firefox” button at the top. What do you think happens if you click it?

That’s right, you’re given the option of downloading a setup file from Hotbar…not exactly the Firefox download you were expecting. Should the end-user install it thinking this will give them Firefox, they’re very much mistaken. 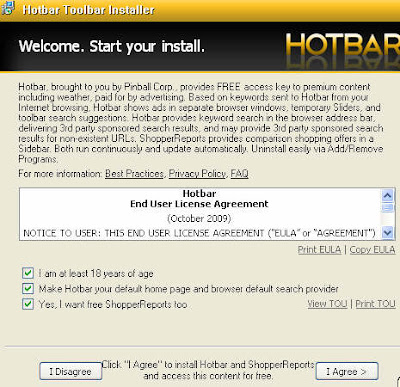 What they actually get is the option to download Hotbar (and no Firefox), complete with a preticked ShopperReports checkbox. While I can understand having to download Firefox to use a Firefox .xpi, the need for installing the above escapes me.

Additionally, there’s a text link further down the page asking you to “Get Firefox now” which also directs you to the Hotbar install.

What’s particularly curious here is that if you visit the “Facebook Fan Page” linked to by the main site, you’ll see the following post:

They’re not happy about people forcing surveys on end-users to obtain the Dislike button (fair enough), yet the main site asks you to “get Firefox” but gives you Hotbar.