Hollywood celebrity Corey Haim has died in typical tabloid fashion: “under investigation.” And we all know that celebrity death equals Internet scams by the boatload.

There are a number of spam runs currently circulating on video sharing sites such as Youtube, ready to catch out the curious and the unwary. Shall we take a look?

Classy. Visiting mycelebzone(dot)com will pop open a Hotbar prompt, which you need to install to “see the content”:

Instead of ghoulish pictures of a deceased celebrity, the end-user will find himself looking at a ghoulish spamblog linking to fake links of ripped movies.

Oh, they’ll have Hotbar, ShopperReports and BarDiscover onboard too. What a value add!

Elsewhere, sites claiming to have horrible images such as Celebrity-autopsies(dot)com will drop you onto surveys and quizzes to be filled in, courtesy of a dancing Michael Jackson: 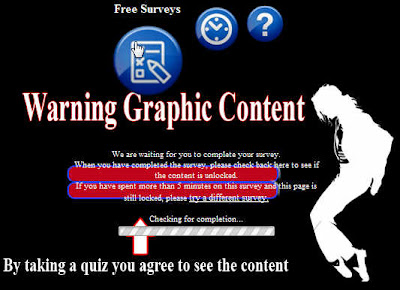 There are various other links floating around on video sharing sites, all of which should be avoided like the plague. There probably isn’t much on them that would be of use to you, unless you enjoy the sensation of gaining nothing while lining the pockets of spamblog merchants.