Many users have complained about Windows 7 strange Battery notification saying “Consider replacing your Batteries” on Laptops and there was a noise about it in Blogosphere but Microsoft has replied to it. There were many Forum posts and blog articles implying Windows 7 is falsely reporting this situation or even worse, causing these batteries to fail.

After upgrading to Windows 7, Many users are seeing a pop-up window that suggests they “consider replacing” their battery, as capacity has slipped below the 40 per cent level. Butt, official MSDN blog has confirmed that Windows 7 isn’t killing Laptop batteries or causing them to fail but it’s a new intelligent feature of Windows 7. 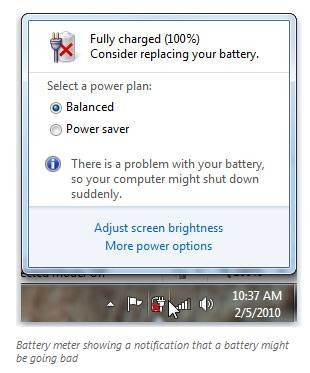 The post says- “PC batteries inherently degrade in their ability to hold a charge and provide power (as is the case for all rechargeable batteries). The cause of this is complex and includes irreversible changes in battery chemistry, and increased internal resistance among other things and those in turn are dependent on the design and manufacturing of the battery.” It means that Batteries degrade with time and this degradation translates into less battery life for the user over the life of the battery in the PC.

Windows 7 makes use of a feature of modern laptop batteries which have circuitry and  firmware that can report to Windows the overall health of the battery. This is reported in absolute terms as Watt-hours (W-hr) power capacity. Windows 7 then does a simple calculation to determine a percentage of degradation from the original design capacity. In Windows 7 we set a threshold of 60% degradation (that is the battery is performing at 40% of its designed capacity) and in reading this Windows 7 reports the status to you.  At this point, for example, a battery that originally delivered 5 hours of charge now delivers, on average, approximately 2 hours of charge.  The Windows 7 the notification is a battery meter icon and notification with a message “Consider replacing your battery”.

Still, Microsoft said it would continue to look into the issue, and asked anyone receiving the warning to let it know on its forums.