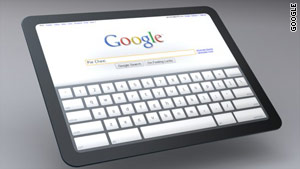 (CNET) — Who could resist the months of hype that paved the way for Apple’s iPad debut last week? Apparently not Google, which has shown its interest in tablet computing with its browser-based Chrome OS.
On Monday, Glen Murphy, a user interface designer for Google’s Chrome browser and the Chrome operating system based on it, pointed to image and video concepts of a Chrome OS-based tablet that went live two days before the iPad launch. Apparently nobody noticed initially, because only now did Murphy tweet, “Apparently our tablet mocks have been unearthed.”
The site also shows the array of devices Google envisions for Chrome OS.
“While its primary focus is Netbooks, Chrome OS could eventually scale to a wide variety of devices. Each would have vastly different input methods, available screen space, and processing power,” according to the Chromium form factors site. Chromium is the name of the open-source developer project that underlies the branded Chrome product.
It’s possible that Chrome OS could be an easier sell on tablets than on Netbooks, the class of device on which Google said it plans to launch Chrome OS. Netbooks often are used as general-purpose PCs, so the browser-based philosophy of Chrome OS is a more jarring transition.
Today’s tablets, in contrast, tend to focus more on a collection of specialized uses such as reading books, surfing the Net, and chores that only require light typing. With that approach, Chrome OS’ break from the PC world could be less jarring. The tablet market isn’t as big as the Netbook market, though.
The ideas are only mock-ups, but Google has established itself as a real if not dominant force in the computing industry. Its Android mobile-phone operating system is increasingly influential, and its Chrome browser continues to steadily grow in usage.
The tablet mock-ups show a variety of Chrome OS tablet ideas, including a virtual keyboard taking up the bottom half of the screen or detached and floating as a separate window. Also included are a slideshow mode, an application launcher, sidebar-mounted browser tabs, and a pop-up contextual menu.
The video mock-up shows a much larger tablet, with hands resizing and moving windows through the multitouch interface, scrolling through text, and typing a search query.
It’s all very rough at this stage, but none of it is too remote from a multitouch-enabled version of the Chrome OS. Google plans to debut Chrome OS in Netbooks later this year, and development of the open-source operating system is well under way.
In a statement, Google didn’t share any specifics about its plans: “Google Chrome OS is still in development, and we are constantly experimenting with various user interfaces to determine what designs would produce the best user experience. As we’ve said all along, the UI is still under development and will continue to evolve as we determine which designs work best for our users.”
Computing companies have been trying to make tablets for years, with little success. Apple hopes its design will change that with its iPad selling from $499 to $829. It’s more of an iPhone with a large screen than a MacBook with no keyboard.
Google is taking a different approach with Chrome OS. Instead of programs running straight on the computer’s hardware and its underlying Linux operating system, Chrome OS applications run directly in the browser.
What’s similar to the iPad, though, is that both have somewhat of an applications head start compared with a computing platform that’s starting from scratch: the iPad can run existing iPhone apps, and Chrome OS can run existing Web applications such as Google Docs.
One thing that’s changed since early tablet years is the arrival of e-book readers as a real phenomenon. Amazon’s Kindle is the most notable example, but there are others, and Apple touted book reading with the iPad. Google, it should be noted, has a conduit to millions of books via its Google Books service.
Given that Apple chose to use a variation of its iPhone OS for the iPad, it’s interesting but not terribly surprising that Google chose to use Chrome OS rather than its phone operating system, Android. In the big picture, Google clearly hopes the browser will be the foundation for applications, letting them run more easily on a multitude of devices.
Android uses a variation of Oracle’s Java technology as a program foundation. Perhaps ironically, Java was launched with the motto for programmers of “write once, run anywhere,” and it is that vision Google is trying to realize with Web applications.