I dislike salesmen. The look on their faces irks me when I can feel the dollars flicking in their eyes. I hate it when my car insurance company ask if i want to get home insurance as well. I do not like it when my credit card company tries to sell me a great new insurance product. In general, I hate to be a victim of cross selling.

Malware authors are just like salesmen. They cross-sell as well. A fake AV tried to do the same to me. Besides offering great AV protection, it wants me to get some useful codecs so that I can watch all my legit DVDrips. Thus, someone decided that in order to get me to install their codecs, he/she will have to terminate all processes related to media players. 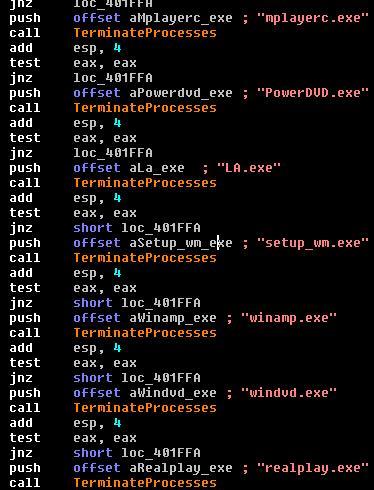 In addition to the above, the malware also terminates different kinds of common applications because I need to update my AntiVirus to get them to work.

Eventually, I ended up with a useless machine that will not play my movies nor launch common applications. Cross selling is bad for computer users! Using Whois, I have confirmed that one russian salesman named ‘Alexey’, has been behind all these.