I received an interesting IM from a friend via BlackBerry Messenger [BBM] this weekend. She was worried that it could do damage to her shiny new BlackBerry and, as she knew I work for [a security company], she forwarded it to me for my opinion. 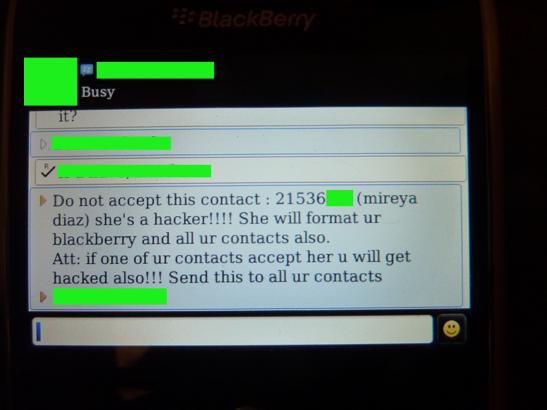 As soon as I read it, I knew it was a hoax and told her just to delete it.

It didn’t really surprise me that these Hoaxes are now being spread via BBM as the devices are becoming increasingly popular. I’m sure all of you have received the usual one via E-mail about a Virus which burns the whole hard disc C of your computer , well now I believe you will be seeing them on your BlackBerry.

I don’t want to take the usual route of blaming Social Networks sites but I believe they are the cause for this new wave of Hoaxes. The problem with Social Networks is that it enables almost anyone to be able to add you on several different IM’s by just visiting your page if you do not set your privacy settings correctly.

The new BBM also enables you to add new users by taking a picture of a barcode which is uniquely created for your BlackBerry pin. This makes it incredibly easy for people who you don’t know to add you to their contact list, which leaves you open to receiving more Hoaxes or Spam messages.

I have personally seen lots of these barcodes on several Social networks and forums and warn those who read this blog not to do the same and only share their PIN with contacts they trust.

Users should be careful who they accept as contacts, as you may start to see a lot more of these Hoaxes or even Spam in your BBM inbox.